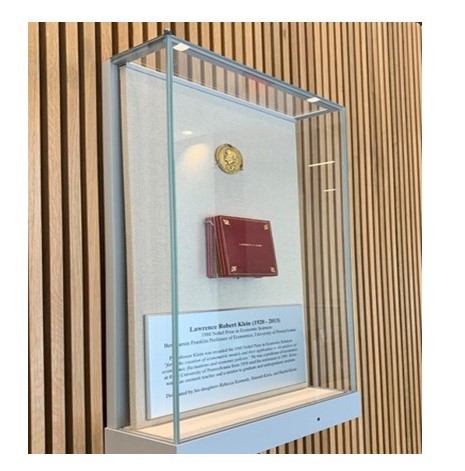 The Department of Economics is excited to announce the donation of the Lawrence Robert Klein 1980 Nobel Prize in Economic Sciences Medal, which has been installed in a beautiful display case on the second floor of the Ronald O. Perelman Center for Political Science and Economics outside of classroom 200. Professor Klein was awarded the 1980 Nobel Prize in Economics Sciences "for the creation of econometric models and their application to the analysis of economic fluctuations and economic policies."  He was a professor of economics at the University of Pennsylvania from 1958 until his retirement in 1991. Professor Klein was an eminent teacher for generations of graduate and undergraduate students. Professor  Lawrence Klein's Nobel Prize Medal was donated by his daughters Rebecca Kennedy, Hannah Klein and Rachel Klein. Please stop by the second floor of Perelman Center at your leisure to admire the Nobel Prize Medal.

Please see here for a description of Professor Klein's contribution to economics and the University of Pennsylvania. Friends, colleagues, and former students who wish to contribute to the department in honor of Professor Klein may use this online form.