After emigrating from Germany, Dr. Adams attended the University of Michigan, where he earned his undergraduate degree in 1949. He went on to obtain a PhD in 1956 under the supervision of Dr. Lawrence Klein, Benjamin Franklin Professor Emeritus of Economics at Penn, who subsequently went on to win the Nobel Prize in Economics.

Dr. Adams served as a business economist in the petroleum industry before coming to Penn in 1961, at which time he worked again with Dr. Klein, who had joined the faculty previously. He helped Dr. Klein create the Wharton Model, one of the first econometric forecasting models using computers to simulate the world economy. It subsequently grew into the Link Model, which forecasts the economy using a variety of input data from smaller models around the world, and which contributed to Dr. Klein’s Nobel Prize in 1980.

A recipient of several teaching awards, Dr. Adams also served as chair of the Faculty Senate (1987-88). He was a visiting professor at many institutions abroad.

He served on the Council of Economic Advisors in Washington, DC during the transition in administrations from President Johnson to President Nixon. In recent years, he was also an active member of the Newton Economic Development Commission, which advises city officials and staff on issues related to new business, industry and commerce. He also served on the Newton Centre Task Force and the Comprehensive Planning Advisory Board. 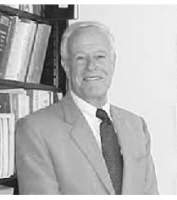